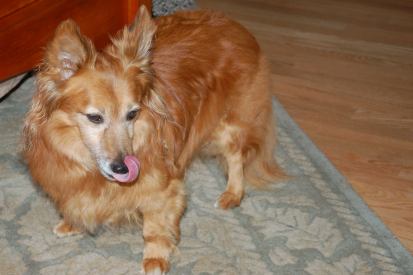 I headed down the hall to see what that pile of stuff was at the end. The tall bookcase looked like it had decided to sit down. I saw Ellie’s light go on, so turned around. She looked at me with relief like I had been long missing and she had just found me. I heard her fumbling around in her closet, then she came towards me with pants on over her nightgown and the leash in her hand. That didn’t seem like a good idea to me. After all there was stuff all over the floor and she isn’t as good as I am at sidestepping rocks and holes and other hazards. She cornered me and put the leash on. Then she picked me up–hey, I’m not a baby, lady–and carried me to the dining table. She got down on the floor with an oomph and pulled me under the table. It was like she wanted to cuddle in this strange place, surrounded by broken glass, some of which she pushed out of the way with her foot as we tried to get comfortable.

She kept shushing me and then after a while said, “We need to go outside, Foxy.” Sounded like a good idea to me. So out the front door we went. The big pot that sits on our porch was on its side. It was dark, but people walked around like it was the middle of the afternoon. There were lights in all the houses. Ellie went next door to the old man’s house and rang the bell. He came to the door, they talked, and then she shouted back and forth to some other people on the street. After a short pee break, we went back into the house.

Ellie took me to the bedroom and closed the door behind us. “This is the safest room,” she said. She picked some pictures up off the floor, went around with a broom sweeping stuff and then after giving me a squeeze, she left the room. Locked in. Too bad. I shut my eyes, but heard her muttering to herself and lots of banging and crashing for a long time.

When it started getting light, Ellie came in and collapsed on the bed. But not for long. Soon we were both walking around the house. She had cleaned up my food bowl and gave me some fresh food and water. The floor was kind of sticky and there were bags of smelly stuff everywhere–scents of vinegar and something sweet. The furniture had all moved, but as the day went by, she pushed it all back where it belonged. She spent a lot of time in the garage, where I got a quick peek and saw bags and boxes all around the car. It smelled like paint. She smelled hot and sweaty like when we used to go for long runs.

It was nice to spend the whole day with Ellie at home. That’s a treat, as she usually leaves me and goes out somewhere in the car. I didn’t get a morning walk, but in the evening she took a shower and then took me out. She was moving kind of slow and bent over a little, but I had a nice walk. Not much new pee to smell in the park that day–maybe everyone else had a clean up day too. 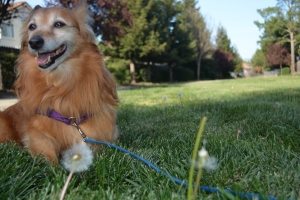 This morning after our walk, Ellie took the leash off me when we got to our front lawn, like she always does. Usually I run like the wind to the front door, which is not in the front, which is kind of weird I guess, but that’s the way it is. Sometimes I have other ideas. One neighbor has little tiny dogs I only get to see in the park, so occasionally I turn before I get to our door and run next door. The front yard smells like those little tikes and I want to sniff it all. Ellie always finds me and brings me back home.

Today the gate was open to the neighbor’s yard on the other side,  so I decided to run there instead. His backyard looks a lot like ours only it has different plants and no dog smells. I got a little confused when I went up on his deck and saw a man behind the glass door. Huh? Wasn’t I at home? Then Ellie came jogging after me, the leash in her hand, calling, “Foxy, wait.”

I know what that means but I just didn’t feel like it. The man opened the door and seemed happy to see me.

“He wants to come in and visit,” he said.

Ellie was having none of that. She ran past me and waved her arm in the direction of home. “Come on, let’s go.” So I ran back out and around the house to our familiar front door. That was a fun game. I’ll have to try it again!