Lenore and I lounged in the coolness of the house on a hot summer afternoon. For days she had been installed on the sofa or on her bed, with a book and a box of those lovely paper tissues I like to play with–well, not when she’s around. She kept sneezing, kissing those tissues, and leaving wadded up bunches around in piles I couldn’t reach. Darn!

She was in front of the t.v. and I was on the floor next to her when I heard the first  BEEEP!  That sound pierced my head like a thorn.  I ran out of the room and looked for the source.  She got up mumbling something about “damned cell phone,” went to her desk, fiddled with the object, sighed, and lumbered back to the sofa.

Two minutes later,  BEEEP!  Again the  piercing sound–ouch! I ran around in circles. She got up again.

“Humph, not the cell phone. Could it be the smoke alarm?”

She stood in the hallway looking up at the ceiling…

Want to know what happened? The rest of the story is in My Leash on Life, available at Amazon.com. 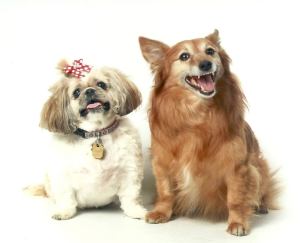 Miss Fluffy is my best dog friend. She is small and round and has soft hair hanging down into her eyes. She doesn’t seem to mind the bow Ellie’s  friend Maria puts between her ears. Her squeaky noises make my tail wag. She goes up to every human she sees to sniff, say hello, and get a pat on the back. Wow! How do you know they’re not going to kick you or pick you up and carry you off?

I run to the door as soon as Maria’s car pulls into the driveway. Maria always makes a fuss over me. Who could blame her? I don’t trust many humans, but Maria is on my short list. Miss Fluffy and I go on walks together with Lenore and Maria and sometimes we have sleep-overs.

I’m bigger and faster than Miss Fluffy; when we’re together, I let her know who’s boss: Hey Fluff, I’m going to pee on that tree and show you what a hunk I am.

She whines to go out, which she needs to do often. What a wimp!  But a sweet-smelling, sexy wimp and a buddy who sees things from my perspective–that is, a foot off the ground.  When Miss Fluffy comes to my house, the play starts.

“See that rope toy? Let’s see who can get it first!” she seems to say, as she races for the toy box.   She bites one end and I bite the other, and the tug of war is on. Especially when Lenore spends the day sitting in front of that box of flashing lights on her desk, a playmate is a great thing to have. When Fluffy spends the night, she sleeps in her tiny bed, right next to mine.

Mealtimes are a challenge, wherever we are, because Fluffy thinks my kibble is the tastiest thing she ever swallowed and I feel the same about hers. Ellie usually stands guard in the middle of the room.

As soon as Ellie looks away, I scoot over to Miss Fluffy’s dish and scarf some down. Miss Fluffy does the same with mine. In the end, we both get plenty to eat and Ellie has no idea who ate what.

Miss Fluffy and I always like to get attention from humans, but especially when we are together. I can sleep under Ellie’s bed all day, but if Ellie is on the sofa and Miss Fluffy is getting her ears scratched, I want some too. It works both ways. If I climb up on the sofa for a tummy rub, Miss Fluffy has to get up there too, only she needs Lenore to help her up. I guess there’s enough love to go around for both of us.

The only problem with Miss Fluffy’s visits is when we go for a walk. I’ve searched for a polite way to say it—Miss Fluffy, you are a bit overweight and lag behind–no—you’re just plain chubby! She takes no offense, but, with her nose in the air and her tail wagging, her look tells me she’s a “lap dog” after all, meant to sit on some royal person’s knee all day getting frequent caresses and just going out in the yard when it’s necessary. I, on the other hand, love my long walks and running in the dog park. When Lenore takes us out, she struggles with the two leashes and Miss Fluffy just hangs back, taking her time, not a care in the world—what a pain!  Sometimes she even sits down and looks at Lenore and me as if to say “I’m done!”

One day Ellie announced, “Enough of this! Miss Fluffy, you’re going to go for a good walk and exercise off some of that fat!”

Want to know what  happened? Read the rest in My Leash on Life, available at Amazon.com. 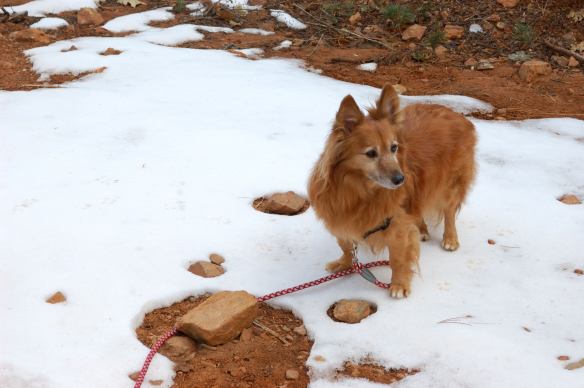 I’ve been to places where the ground is covered with ice, the air is crisp and cold, and Ellie’s feet make large crunching noises as they break through the crust of snow.  These days it’s pretty cold outside when we do our morning walk at home in Napa. But always when we come in out of the winter’s cold, I am greeted by the warmth of the house and smells lingering in the air from last night’s dinner.  It’s all different when we go to visit our friend Marcie in the woods.

We drive a long time to Marcie’s house and I worry because I did not see my bed go into the car with Ellie’s bags.  Are we going to drive back home the same day? If not, where am I to sleep? At least I see the bag of kibble, so I won’t go hungry!

I look  out the window for a while at passing cars and then curl up in the back seat and take a nap. We stop in a shopping center and Ellie leaves me; she returns smelling like a hamburger and fries. Where’s mine?  She lets me out for a short walk and offers me some water, but I’m not thirsty–just hungry for hamburger!

After more driving, we leave the main road and I know we’re getting close when I hear the crunch of tires on rocks and see dust rise around the car. We go up a hill and around a bend and turn into a driveway. It goes down the hill and ends at a house sitting  under tall trees. As soon as I’m out, I’m alert for scrambling squirrels and the scent of yipping night creatures who leave their mark everywhere.

I’ve been to this house before, but I think it was summertime. Today there is a fire going in the wood burning stove in the kitchen and everything–even my own fur after a while–smells like wood smoke. Marcie gives us hugs. “Well, hi there Foxy, how are you?” She shows us to the back bedroom.

Wait–there is something weird going on here. What’s that smell? Can it be? There is a definite scent of cat coming from the other bedroom. I poke my nose in through the doorway and there on the bed is a giant two-toned creature who takes one look at me, arches her back and hisses loud enough to spray her spit across the room…

Want to know what happens? Look at My Leash on Life, available at Amazon.com. 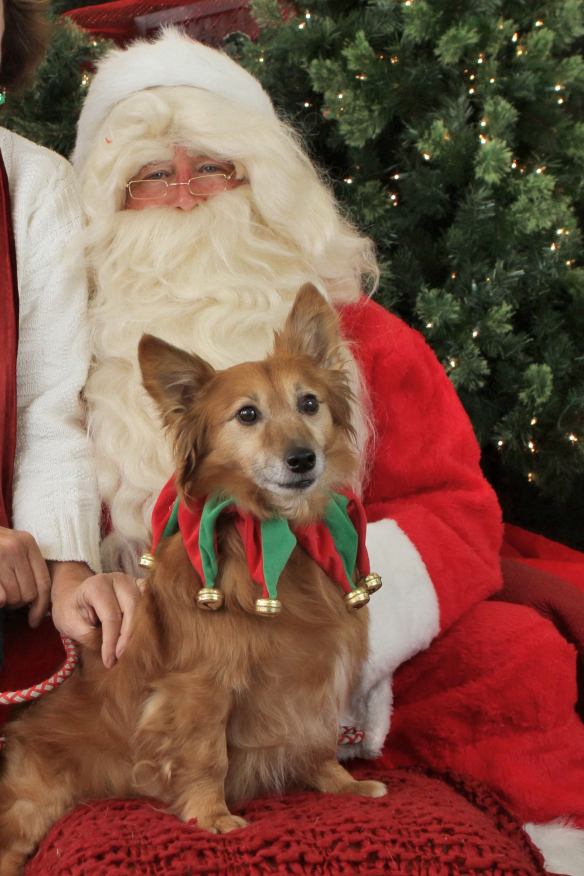 Who is this guy and what does he want? 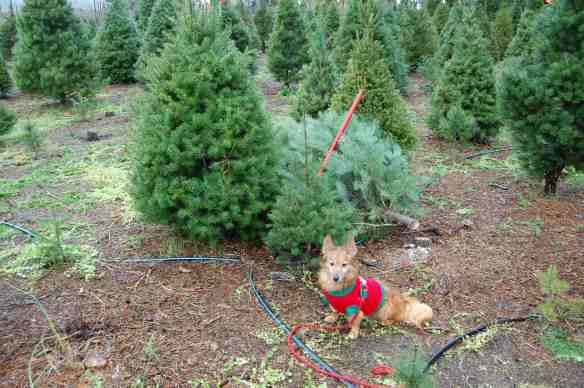 When I saw my humans drag a tree into the house, I was sure it was a treat for me–my own watering post. Someone said “Uh-uh” every time I approached it, so I learned the tree was not there for my release or entertainment. That was long ago.

Now Lenore puts that tight sweater on me–ugh–and we go in the car to a little forest. She picks up a long-handled thing with sharp teeth, and we walk among the trees. I smell the blanket of dried needles on the ground, the sappy stumps where trees have once been, and the pee spots left by other dogs. It’s a fun walk, except she’s talking all the time: ” How about this one, Foxy?  No, it’s too short. Maybe this one–no, it has a hole in the side. Maybe this one?”

It continues until she circles around one tree, leaves and comes back to it again. “This is it!” she announces, as if she had just spent an hour digging up a delicious bone.  She drops the leash, tells me to “stay” and gives me the look that goes with it. I sniff around the area while she gets down on her knees and saws away at the tree.  She grunts and groans, pauses to take off her coat, then I hear more grunts and groans, along with the “udge, udge” sound of the saw. Finally, she stands up, pushes on the tree and it falls over, releasing a strong piney scent from the cut.

Then, while some guys are putting the tree on top of our car, we go into the little house nearby and the fun begins. It’s warm inside and I’d love to take off my sweater, but that’s not part of the plan. The place smells like apples–it’s coming from a pot of steaming liquid and the cup Lenore is sipping. The people who run the place remember me from the last time and want to talk to me and pet me.

“Hey, buddy, are you ready to have your picture taken?”

Lenore sits down in a big chair in front of the fireplace–take this sweater off me   already– and lifts me onto her lap. The lady with the camera is making all kinds of noises. I look the other way. Someone behind the camera lady makes a piercing squeak, and I look up, ears at attention, wondering what on earth is going on. Flash! Bright light blinds me and then we’re done.

Back to the car, I enjoy the tree scent all the way home. The next thing I know that tree is standing up in the living room and Lenore is collapsed in her chair looking very proud of herself. Soon the room is full of boxes of shiny balls which she spends all day placing on the tree. I don’t bother to get a close sniff, but know I’ll be smelling that tree for a while until she drags it out of the house.

Now I just have to worry about the visit with Santa.